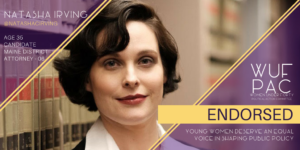 “Our country needs more women leaders like Natasha serving in elected office, particularly as District Attorneys, who often have an enormous impact on individual lives and in communities,” said Atalie Ebersole, President of WUFPAC. “Electing proven leaders like Natasha will help us give young women a greater voice in shaping public policy..”

“I am pleased and honored to be endorsed by Women Under 40. This organization has been instrumental in identifying and supporting young women as we enter the world of politics. I am grateful to be added to the list of previously endorsed women like Senators Tammy Duckworth, Tammy Baldwin and Kirsten Gillibrand along with Congresswomen like Gabrielle Giffords, and Tulsi Gabbard. I hope to live up to the standards of service set by these women.”

Get involved in Natasha’s campaign by visiting https://www.irvingforda.com.

Founded in January 1999, WUFPAC is a non-partisan organization that supports women forty years of age or younger running for elected office. Our mission is twofold: to help elect more young women to elected office so that young women have an equal voice in shaping public policy, and to build the seniority of women in Congress by electing women at a young age. For more information, visit www.wufpac.org.